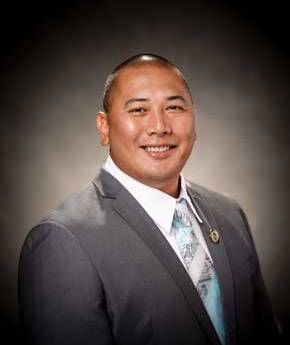 Mayor
Municipality of Hagåt
Mayor Kevin Susuico is married to Joann Meeks Susuico and together they have four children: Keniann, Keiviann, Kaivan and Kamalen. He is the son of the late ...Kenneth and Maria Taitague Susuico.
In his early years, Kevin attended Hagåt Elementary School (1989-1994); Piti Middle School (1994-1995); and Mount Carmel Catholic School (1995-1997). He graduated from Southern High School in 2001 and proceeded to further his education at the Guam Community College where he was conferred an Associates of Science Degreein Marketing.
Aside from the dedication to the community, he enjoys spending time with his family, meeting new people, socializing with great company and most of all servicing and praising the Lord. His gratitude for all the good in life also fuels his passions for helping those in need and serving in various capacities within the community including as a 3rd Degree/4th Degree Knight of Columbus in the Mount Carmel Council (Number 11629) and by assisting Our Lady of Mount Carmel Catholic Church in its various ministries. He has also served as the President of the Marcial A. Sablan Elementary School Parent Teacher Organization.
In addition to his government service, Kevin has served in a variety of capacities and holding various positions in the private sector for finance, logistics, and telecommunications companies from 2002 to 2010. From July to October 2011, he worked as a Special Projects Coordinator for the Guam Homeland Security. He was also employed by the Port Authority of Guam as an Accountant II from 2011-2013. After the untimely passing of ...Vice Mayor Agustin G. Quintanilla, Kevin contended and was successful for the Vice Mayoral position of Hagåt in a Special Election held in 2015. Since then, he has done so much to improve and beautify Hagåt. He continued the path that Mayor Carol S. Tayama and ...Vice Mayor Quintanilla have made, while making his mark to make Hagåt even greater. He continued his journey with the people of Hagåt, seeking and succeeding to his first term as Mayor in the 2016 elections.
As the newly elected Mayor of Hagåt, Mayor Kevin and his Team began to move the village forward with a wide range of plans and ideas. Some of his accomplishments include the promotion and expansion of the Hagåt Mango Festival, the creation of the Hågat Memorial Site and Service, the creation of the Hagåt Santa Rosa Fiesta Carnival, and the Thanksgiving Giveaway.
He and his team have been successful in making Hagåt a safer community to live and grow in through projects such as the renovation of the Hagåt Gymnasium, the installation of the lighting for the outside basketball courts, renovations to the Hagåt Senior Citizens Center, and with the removal of tons of recyclable items and illegal dumping throughout the village.
Together with his team, Mayor Kevin has continued and enhanced existing events such as the Annual Na Bonita Hagåt, Annual Community Easter Egg Hunt Eggstravaganza, Annual Halloween Extravaganza/Candy Run, Annual Christmas Lighting/Candy Run, the organizing and managing of youth sports in basketball and baseball,and the MASE PTO/AMO Santa Claus visit.
Mayor Kevin has been active in the established Sister City collaboration with the Philippines and CNMI (Tinian). He has worked and gained additional support from our Military Partners as well as our Island Business Partners. In 2018 to 2020, Mayor Kevin was elected to serve as the President of the Association of the Marianas Island Mayors Organization and currently serves on the Board of Directors of the Guam Regional Transit Authority.