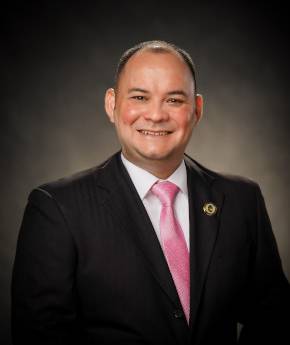 His work experiences, long-time community involvement, and his inherent desire to make a difference contributed to his successful winning of his first term as Sinajana Vice Mayor in 2004. He subsequently served a successful second term after his re-election in 2008 and went on to become Sinajana’s current Mayor, having won his campaign in the 2012 election with winning two consecutive elections unopposed in 2016 and 2020.

Robert’s diligent efforts have made Sinajana a safer place to live, work, play and do business in. He reorganized and restructured the budget and streamlined operations. Along with Vice Mayor Rudy Iriarte, they successfully renovated and repaired the multi-purpose court into Guam’s first open-air gymnasium, the baseball field, the community center, and a new playground. These efforts have also attracted development and private investment in the community.

As Mayor, he pushed for an active community center, first catering to the needs of the residents of Sinajana. He worked closely with Vice Mayor Iriarte, his team of workers, and the Municipal Planning Council to organize, provide, and sponsor youth baseball, basketball, and hockey teams, an education-based summer and Christmas camp programs, and has championed efforts on social justice, the environment, education, public health and wellness, and poverty prevention.

Even prior to elected office, Robert has always played an active role in various ministries at Saint Jude Thaddeus Catholic Church where he serves as a Parish Council Member, a Youth Minister, a Choir/Band Director, a Liturgical Committee Member, Adult Confirmation Teacher, and a member of the Knights of Columbus. He also served as an altar server, lector, Eucharistic Minister, and middle and high school CCD teacher over the past twenty-six years.

His collective experiences, including working within the Legislative and Executive Branches of the Government of Guam, have helped him gain valuable experience in a variety of areas which grant the knowledge and understanding to better provide for the community. Through these experiences, Robert has received numerous awards, recognitions, and accolades for his contributions to our island's youth, manåmko’, the religious community,and the community-at-large.