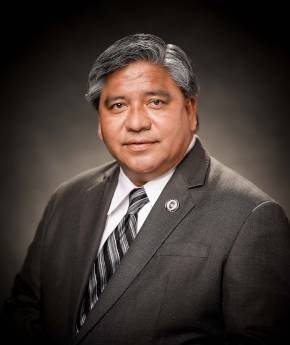 Mayor
Municipality of Chalan Pago-Ordot
Mayor Jessy Cruz Gogue began his public service in January 2009. During his first term, he served as an Ex-Officio Member for the Guam Education Policy Board (2009, 2010) and a State Advisory Group Member for the Department of Youth Affairs (2011, 2012). He also served as the Chairperson for Guam’s Liberation Day Parade (2010, 2011, 2012); a Member of Guam’s Red Ribbon Week Planning Committee; and Advisory Board Member, Sanctuary Incorporated.

During his second term in office, he represented the Mayors’ Council of Guam as liaison to the Consolidated Commission on Utilities and the Guam Legislature. He also volunteered to be a Board Member to the Guam System of Care Council for Children and the Guam Crime Stoppers, in which he served as their Treasurer. For his third term, he served as the Vice-President to the Association of Marianas Island Mayors (AMIM) and was the Mayors’ Council Representative to the Guam Council of Arts & Humanities Agency (CAHA) and the University of Guam’s Regent Nominating Council (RNC).

In his youth, Mayor Gogue attended Ordot-Chalan Pago Elementary School, Agueda I. Johnston Middle School (formerly George Washington Jr. High), and graduated from George Washington Senior High School. After high school, he enlisted in the U.S. Navy to attend the Naval Academy Preparatory School (NAPS) in Rhode Island. Following NAPS, he received a Secretary of the Navy appointment to the U.S. Naval Academy in Annapolis, Maryland, graduating in 1983 with a degree in Applied Sciences. He was subsequently commissioned a Second Lieutenant in the Marine Corps and designated as an Engineer Officer after graduating from the Marine Corps’ Engineer Officers School in 1984.

He was also an Engineer Detachment Commander at sea in the Western Pacific, training in places such as Japan, Singapore, Malaysia, the Philippines, and Korea. He is also a graduate of the Marine Corps’ Amphibious Warfare School in Quantico, Virginia. During his military service, his awards included the Navy-Marine Corps Commendation Medal, the Navy-Marine Corps Achievement Medal with a gold star (second award), the National Defense Service Medal, and the Meritorious Unit Commendation ribbon with three stars (second, third & fourth awards). Although selected for promotion to Major, Mayor Gogue resigned his commission in 1993.

After returning to Guam in 1993, Mayor Gogue worked as a Computer Systems Supervisor for the Department of Administration. From 1993 to 1998, he managed and supervised the team that maintained Guam’s Public Welfare System. After leaving the government, he was contracted by Pay-Less Markets’ Inc. to implement a new pharmacy dispensing and billing system for their SuperDrugs’ franchise. Soon after completing this project with Pay-Less in 1998, he took over as General Manager of Gogues’ Mini Mart, Vice-President of Gogues, Inc. and was a Consultant and Property Manager to GoPac Services, a venture in which he started.

Mayor Gogue’s education and experiences helped him achieve many of the goals for his community. This included the monitoring and completion of the Route 4 Resurfacing project which incorporated the addition of a “center lane” that he advocated for, given his career experience as an engineer. He also monitored and insisted the completion of projects associated with Ordot Dump Closure, in accordance with the Consent Decree Agreement between GovGuam and the U.S. Environmental Protection Agency (US EPA). In his most recent term, he successfully accumulated the funding to construct a new Mayor’s Office and successfully applied for a $3.5M federal grant to construct a Multi-Purpose Recreation / Emergency Center. Construction of the new Mayor’s Office is imminent with the village anticipating breaking ground for the new Multi-Purpose Center in September 2021.

Mayor Gogue is married to the former Elaine Shimizu Jesus of Asan and they have two children, Kimberly Michelle and David William, and a granddaughter, Kaitlyn Michelle. He is the son of †Francisco and †Primitiva Gogue. His siblings include James and Jeong Ja Gogue, †Francis and Julia Borja Gogue, Benny and Ruth Borja Gogue, Cathy and Roy Siongco, and Lisa and Tommy Villanueva.